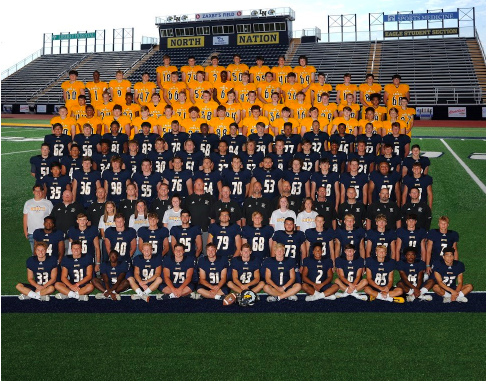 Memories Made with Our Varsity Football Players

The Liberty North Varsity football team is currently undefeated this season. With a winning streak of 8-0. They are also taking the lead against the other schools around the Kansas City area. However, it’s not always about the score. It’s about the memories that are made that are keeping the eagles going this season as they finish it out strong,

“My favorite memory was when I scored my first two touchdowns. I was just shocked by it. I didn’t think that I would get the ball but at the end of the game we won,” Sophmore Ilijah Brooks said.

Brooks is one of the 46 Sophomores that are on the varsity team. The rest are a mix of juniors, seniors, and one freshman. They have a total of one hundred and fourteen players on the team.

“I don’t know that I have a favorite memory yet just because the season isn’t over yet but so far it would probably be beating Lee Summit North because it gave us a lot of confidence,” Senior Garret Linn said.

The Eagle’s very first competitor of the season was Lee Summit North. The stands looked to be almost overflowing. A lot of freshmen came out to see the game for the first time and also came to there very own tailgate. Some would say the atmosphere that night was great for going against a team that has beat us our team in the past. There was a lot of cheering and the student section went wild. The win made the game even more memorable to our football players.

Football practices are on Monday through Thursday. That’s every weekday except for Friday. Gameday. They have been working hard in the summer as well.

“My favorite memory was probably the first game and beating Lee Summit North because it just set the tone for the season,” Junior Tyler Jenness said.

The game was a win. 23-21. The game was definitely close but our Eagles worked hard for it. It gave them a lot more confidence going into the rest of the season knowing that they had beat one of the top teams in our area. Along with a ton of hard work and training, the eagles are undefeated with only two more games left.

“My favorite memory from this season is winning the first game against Lee Summit North because they have crushed us in the past seasons,” Junior Chase Martin said.