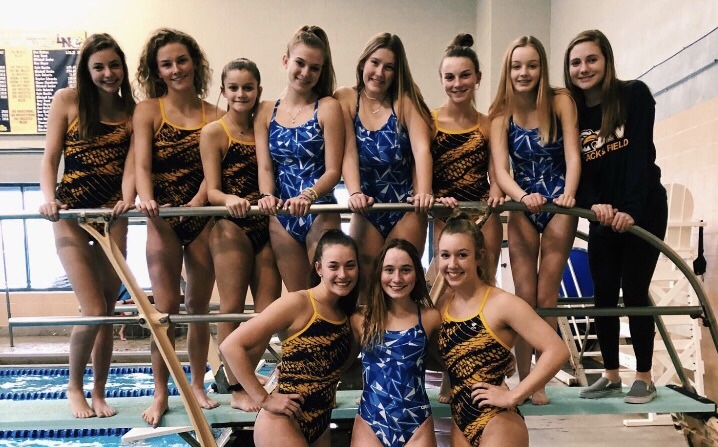 Q: What is different about this season compared to last season?

A: “Last year having fourteen to fifteen people on the team was stressful and after the normal season ended and it was just the two girls practicing for State. We got a lot more dives in and I improved a lot more than I did over the entire season. So he [the Dive coach] agreed to let us [seniors] make cuts so that we will have fewer girls on the team, get more dives in, and be able to improve throughout the entire season,” senior Diver Grace Ericsson said.

Q: How do you feel now versus the beginning of the season?

A: “At the beginning of the season I was really nervous since I had never done Dive before and now I feel a lot more confident and I have more dives than I thought I would be able to do,” freshman Diver Madelyn Hartman said.

Q: How was it joining the team as a freshman?

A: “It was a little scary because I didn’t know anyone but throughout the season I have gotten closer with everyone. The whole team, including the Liberty Divers, who we practice with, are all very supported of each other,” Hartman said.

Q: What is your favorite part of high school Swim?

A: “My favorite part of Swim is the team aspect of it. I like being around all the teammates, having that atmosphere, and that type of support group that Swim gives me,” junior Swimmer Kate Huyser said.

Q: Has this Swim season lived up to your expectations so far?

A: “I think this season has been everything I expected it to be. I looked at it with really big goals and a lot of them we have accomplished so far,” Huyser said

Q: What are you looking forward to for the last couple weeks of Swim?

Q: Has this Dive season lived up to your expectations so far?

A: “I definitely think this season has lived up to the expectations I had at the beginning of the season. With it being my senior year I wanted to finish strong and I think I have. There’s been a lot of good memories with the team and qualifying for state. I’ve done really well this year and placed 2nd at the last six-dive meet, which was awesome. I have also gained a lot of dives this season and corrected some flaws from my dives I already had,” senior Diver Grace Cantrell said.