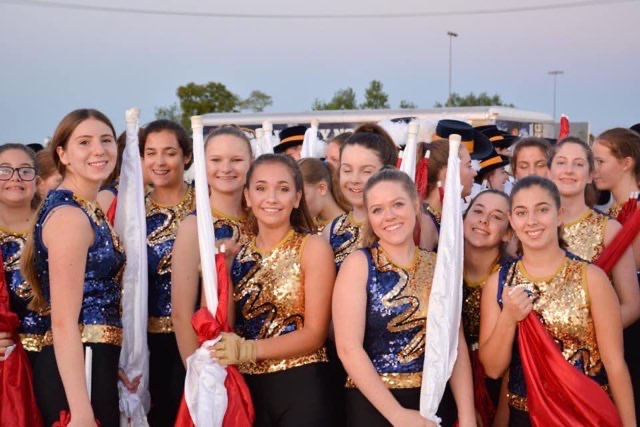 5, 6, 7, 8. Toss… and catch. Being a part of Liberty Norths’ Color Guard is no easy task. There is quite a bit of hard work that gets put into the home football game half-time performances.

“During the school year before we started auditioning and practicing after school then throughout the summer, we continued to practice all the way up to band camp, the first weekend of band camp freshman attended was an all-day event from early morning to the afternoon. In the first week of band camp, we started our drill and that lasted the same amount of time as the first weekend. After band camp we as Colorguard would head to practice then when the week was over we continued regular practice up to the start of school. When school started we started morning and after school practices,” freshman Isabella Ferrante said.

They started practicing before school even started. They had to go to summer workouts and then got to try out. Even now they still practice every day.

“We practice every morning except for Monday, and then after school on Monday and Thursday,” Freshman Olivia Tomosieski said.

As the weather gets colder, the Color Guard must bundle up, because unless it’s raining, it’s practice time.

“We practice outside every morning on the football field unless it rains or is Monday. If it is we practice in the orchestra room then after school practices are at LNHS and Shoal Creek Elementary,” Ferrante said.

Their practices look like a stereotypical sports practice. Warm-up, stretch, and then clean up or work on what needs to be done.

“We usually start a practice with warm-ups and stretching. Then we do across the floors. After that we work on whatever needs to be worked on and cleaned up,” Freshman Kendal Tavares said.

“I think that catching while moving or its windy is really hard because you could easily hit someone or yourself or you could drop the flag and have to air flag the rest of the routine,” Tavares said.