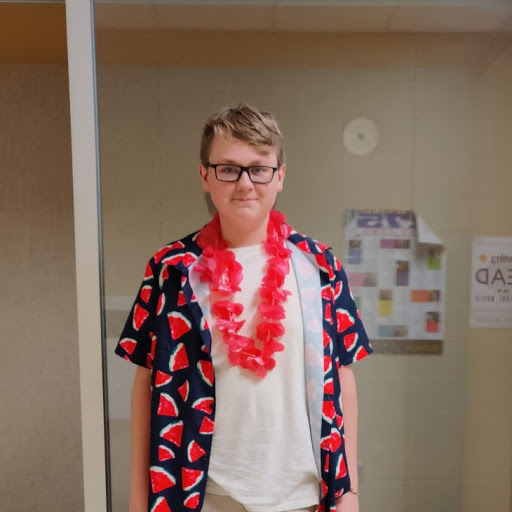 Liberty North High School sophomore Parker Bolte brings his humor to other students. For Bolte, it’s not his personality that makes him who he is, it’s his dream job that started from a young age and the childhood toy Legos.

“I want to be an architect when I grow up, the kind that plan and designs since I like building and they make a lot of money. In my civil engineering and architecture class, we’re learning this program and we’ve been doing it for like three weeks now. We were given a project to choose and my partner and I picked to build a farmhouse, so now we’re building a farmhouse out of cardboard,” Bolte said

Sophomore Ben Pritchett says that his humor is a key trait to Bolte. Pritchett is considered one of Bolte’s close friends and the two have stuck together ever since.

“We’ve been friends since last year, and we became friends because we shared a class and sat next to each other. What makes him different is his humor, we both like the same things and think the same.” Pritchett

Being funny isn’t what makes him different, his friends and family would say that it is a quality but to him it’s not something he notices.

“I use my humor with everyone but more with my friends and family; they’re the ones that call me funny. I just think I’m being awkward and when I say something but everyone laughs. I didn’t get it from anyone, it’s just part of my personality,” Bolte said

Bolte uses his humor at his work Pizza Shoppe where he started almost 5 months ago. Bolte doesn’t get much time to himself with all the hours that he puts in and he misses a lot of school activities, like homecoming.

“I was looking around for a job and my friend worked at Pizza Shoppe so he helped me get the job. When my friends and I go out we usually go to the movies. I don’t get out much because I work so often. They put me down usually for about 35 hours every two weeks since they pay bi-weekly, but this week is forty-two because I have to work 7 to 8 on homecoming night which sucks but I wasn’t going anyways so it’s fine. I’ve worked there for about five months, if not then close.” Bolte said

Bolte talks about some of his life saying he didn’t originally grow up in Liberty, Missouri and gives an insight on how he got into building and where it originated. Bolte also shares a story of his dad and how he got into the railroad business.

“I was born in Topeka and stayed there until Christmas 2015, then I moved with my dad here. When I went to the dollar store with my grandma they would have legos and I got some every time. My dad told me he wants me to go into the railroad business with him since he thinks it’s something I’d like.  All you needed for railroad work is a high school diploma and he’s been successful in that career and would like to see the same for me.” Bolte said