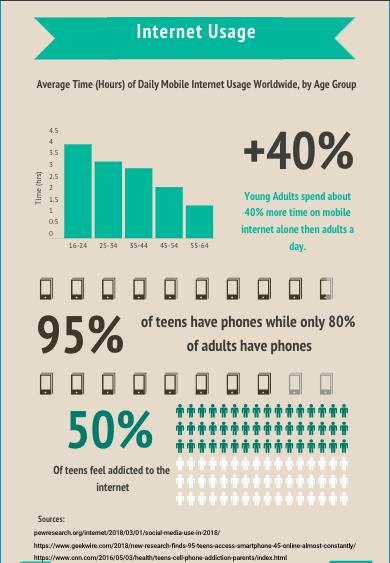 In today’s society, people today are surrounded by the internet. Computers, the constant beeps from phones, even every day in the modern classroom. Even if it can be a necessity for some people’s work lives and school, is there a point where it becomes too much? When does someone have an addiction?

“A problem with that now is [teens] have a sort of dependency on it. Now it’s so hard to wean them off of that that no and no one’s really tried at this point. Even if they have those rehab programs for Internet addiction. The majority don’t go to those because they don’t think it’s a problem. They think this is normal. And it’s not totally wrong, but it’s getting out of hand to a point. In middle school, we have Chromebooks and iPads in elementary school. I mean, that’s when you need to be more creative. And instead of boosting their creativity with like activities and thinking and problem solving, you’re showing them videos,” senior Natalie Knebel said.

Today’s children are exposed to technology at a young age. The average kid gets their phone when there are nine or ten years old. There is also the adaption to using iPads in elementary schools, meaning that children are constantly exposed. One and two-year-olds are even surfing the web looking up their favorite videos and shows. It is a hard window to close once open, but counselor Andre Leonard believes that the internet should not be taken away. Instead, those children need to recognize it as a tool.

“It needs to not be treated as a babysitter. Automation is not intelligence, intelligence is wisdom. It is the ability to take knowledge to be able to assimilate that knowledge and act upon it. Knowledge is the end result. Young people are doing remarkable things because they have access to information and have the ability to assimilate that information. So we are now a lot smarter than we were but we are becoming lazy. People have access to a lot of information but they don’t know how to wisely use it. So since they don’t use it wisely, they don’t pay attention and then it also makes you arrogant because you think you’ve heard it already. Even if you haven’t incorporated it into your life and that makes you willingly ignorant. Because again, knowledge without understanding is confusion. With all that information you don’t have to work for it,” Leonard said.

The main course of action parents are using is to take technology away. For example, families are having weekly events like “cyber-free days” where parents take away their children’s phones the entire day to try to stop early addiction. Other parents are simply putting off getting them a phone until they are older. This is also said to create the opposite effect, however, sparking the child’s addiction. The idea that taking something away only makes you want it more.

“Well, what parents usually try to do is limit the amount of screen time, and all that does is annoy the kid and make them want to use it more. So really you should say, instead of saying ‘I’m only giving you an hour’, say, ‘Hey, why don’t we just maybe give them a different mindset or give them an activity to preoccupy their time’. What doesn’t help is preaching all the time, because we are addicted [to technology], but parents come home and they do the same thing, play games or search the internet. Then they’re trying to teach you about how to use the internet and are just as addicted as you. So is taking the children’s internet really helping the situation?” senior Noah Morris said.