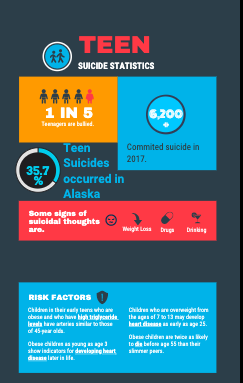 Teen Suicide is the leading cause of death among teens.

Many factors are involved such as the environment, race and even gender. Research shows that 21% of females are more likely to think about suicide, while males are more likely to succeed in committing suicide. Native American teen boys had the highest suicide death percentage in 2017 statistics at 28.8%. (According to childtrends.org). With teenage suicide on the uprise, steps are being taken to prevent them.

“Liberty North counselors are very friendly, understanding, and create a safe environment for students to feel comfortable sharing issues. But I can only speak from my experiences,” Senior Leah Byers said.

Liberty North Counselors offer programs and awareness to avoid suicide from taking place. One of the programs set into place is called the Implementing the Signs of Suicide Program it has been used for three years. This program is used to help spread awareness of the signals leading up to a suicide

“We also train the staff in the building as well as the parents in the community on the signals of teen suicide,” Counselor Lauren Eikel said.

This program has been successful in preventing suicide. Parents have come forward to the school being concerned about their children or children’s friends.

“I rarely hear about students attempting suicide but it is not something students can share with their peers without facing ridicule (most of the time). The biggest factors that go into suicide no matter the age are home life/family, poor coping skills when facing perceived failure, a normalization of feeling suicidal in our generation’s culture, and successes in school or work. I think that a change in our culture and the attitude we have about mental illness and people seeking help instead of struggling because they think they can’t change,” Byers said.

Students at North are surrounded by media and technology. Suicide is a popular topic in today’s pop culture, such as a TV show called “13 Reasons Why”, which brought attention to the signs of suicide as well as the modern culture in the typical high school. Music also has brought much attention to suicide, artists such as Lil Peep, Juice World, and XXXTentatcion were very successful for their music that speaks on depression. High school students are the majority of the listeners of their music. Some adults believe that they are influencing/glamorizing suicide among teens.

Peers have an impact on teens as well. Every 1 in 5 students report they get bullied (National Center for Education Statistics). Teens who are bullied are more than twice as likely to become suicidal or experience mental health issues (Hinduja & Patchin, 2018). Some signs a teen is experiencing difficulty with peers is attendance, drop in grades, weight changes and lack of sleep or obsessive sleeping. Students who are experiencing low self-esteem are also more likely to be influenced by peers to do drugs. Drug and alcohol dependency can lead to suicide as well.

“This generation’s culture needs a little TLC, people need to respect each other and be willing to make a change. Mental Health needs to be recognized in order for the change to happen,” Byers said.

Students can go to trusted adults such as teachers or coaches to find help or counselors. Students can also call the suicide hotline 1-800-273-8255 which is open 24 hours. There’s plenty of healthy options to cope with depression or suicidal thoughts.