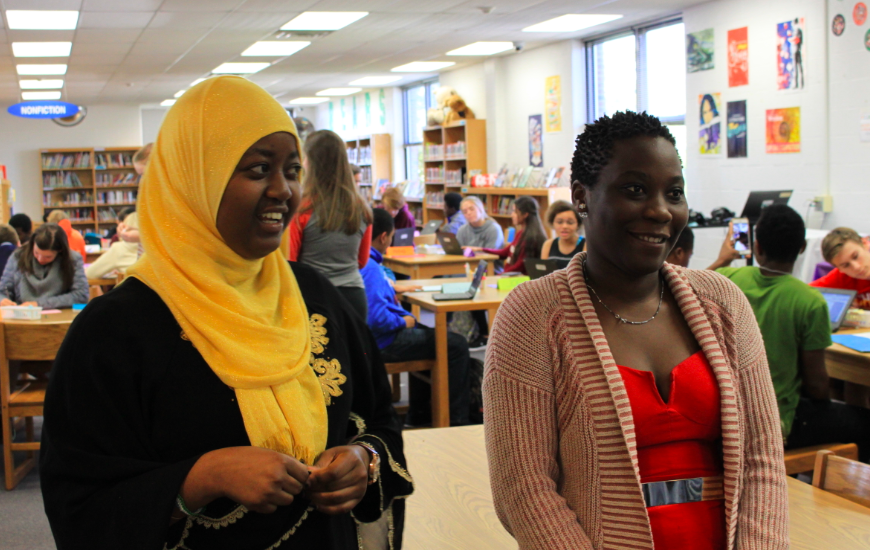 25 Minutes and a Million Miles

Approximately twenty-five minutes from Liberty North High School resides East High School, one of the most diverse schools in the Kansas City area with students from all across the globe. Recently, the Freshman Humanities classes traveled to East High to meet and work with refugee students that they had been communicating with. The point of the project was to break down barriers and stereotypes about refugees. Although they are only twenty-five minutes apart geographically, their backgrounds could not be farther apart.

“Last year we started the Humanities class. We wanted to make sure that we had real-life experiences that the kids could learn from so rather than just reading about history in a book, they really get to connect what they’re learning to the world. The first unit was immigration and I have a friend, Ms. Mora, who teaches here [East High], and she teaches refugee students. We thought this would be a great opportunity for her kids to have an audience and to meet Americans to share their writing with, and then for our kids to learn about refugees and what their lives were like before they came here and a little bit of what their lives are like now,” Humanities teacher Kelly Lock-McMillen said.

East High School is unique in that it teaches students from over forty countries, something unfamiliar to students at Liberty North, a predominantly white school. That’s why it was the first choice for the project which was aimed at overcoming the prejudice that comes with being a refugee.

“I am very fortunate that I teach here at East because we have students from literally all over the world. At last count, we had fifty-three different languages that are spoken in our school, and we have about 1,400 students here,” East High teacher Diane Mora said.

The students from both schools had been communicating through videos and letters before eventually traveling to meet in person. Liberty North students traveled to East High first, and East High students will travel to Liberty North in the near future. They hoped to build friendships between the two groups of students and prevent cultural bullying.

“We did a lot of learning about immigration and who refugees are, and then we exchanged some questions with the students. They’ve communicated just in writing a couple of times, we’ve had some videos that we’ve shared so we kind of knew what each other looks like. And we’ve done a lot of planning together behind the scenes, making sure that we’re culturally aware, not making any faux pas, asking the right questions, and giving the right feedback. A lot of preparation went into this project,” Lock-McMillen said.

The Liberty North students had the opportunity to read writing by the refugee students about how they came to America and then were able to meet for the first time face to face.

“I want my students to see the human side of immigration and what a refugee is. I think it’s really easy to get caught up in what we see on the news and in social media, and no matter what you believe, you should know about the human connection. That was my intent for them today, to have them come and actually meet someone their age, read their story, and then make their own decisions based upon their experiences and not what they see on social media. I think it’s important for us in a global society to know the different cultures and to figure out how we can communicate with people that are different than us,” Lock-McMillen said.

The project required many students to step out of their comfort zones but overall seemed to help broaden their perspectives of the world around them.

“I like the idea that they’re able to tell their stories to people who maybe don’t really have a grasp of some of the challenges my kids have had getting here, and the challenges they face as someone learning a language in a culture that speaks English. It’s the world we live in. I think we’re raised to see the world through our skin color, unfortunately, which in the United States means a white dominant perspective, and that really isn’t the reality. I think that to have exposure to the lives and the challenges of my kids has led me to be hopefully a little kinder out in the world,” Mora said.

East High has what are called ‘shelter’ classes for incoming refugee students who don’t speak English. In these classes, students work their way up through five levels of language arts, science, social studies, and math. In their English class, the students wrote stories about their lives before and after coming to America and shared them with the Liberty North students.

“I am from Africa, I was born there and then the UN came and gave us the opportunity to come here and we like America very much. We’ve liked being able to share our stories with you [Liberty North] because you know a lot more English than us. The thing I like most about America is the school. I love school, there’s really nothing that I hate. In Africa we had to walk from home to school; there was no bus, no computers,” East High student Kiza Naiukuli said.

There are nearly sixty-five million refugees in the world, with 24,500 being resettled to the U.S. in 2017 (according to the UN Refugee Agency).

“I think what I gain is every day I learn how little I actually know about the world and about people, both good and bad. Some days I go home thinking that the world needs to be a much better place than it is, and some days I go home filled with hope and the promise that it actually is better than I thought,” Mora said.

Photo Gallery of the visit by Claire Henry

[Show as slideshow]
[View with PicLens]