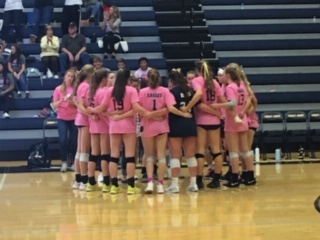 Despite the best record in school history, the volleyball team has been plagued with injuries this season. Because about one-third of the program has been on the bench this season for injuries, both girls injured and healthy have to make adjustments to their game.

“I strained my tricep while playing. While I was injured, I still went to every practice and did what I could to stay engaged. While I couldn’t do anything with a ball, I still ran during any conditioning drills we did, and while I couldn’t do some exercises such as push-ups, I would do something different, for example, sit-ups,” sophomore Reagan Maxon said.

The process of returning an athlete to the game is one that involves multiple people to make sure that the player is ready to go back safely.

“I get the ok from a trainer and a parent. It’s a game, and injuries can sometimes affect athletes for a lifetime. I’m always cautious working a girl back into “volleyball shape” before allowing them to go full speed. As a coach, you always have to remind girls how to be safe.  I treat my athletes like I would my own child,” junior varsity coach Sean Barrett said.

While many girls have returned to play, some remain on the bench a little longer. Freshman Jilliane Spiegel is currently out with a bulged disc in her back.

“It’s a little upsetting and kinda frustrating because I just want to play. I’m starting physical therapy and I’m getting back into practice so I’m just going to do everything I’m told so I can get back in,” Spiegel said.

With so many girls getting hurt, the coaches have to make adjustments to their lineups and game-plans to make sure their team is as successful as possible. These changes vary depending on the injured girls’ positions and the style of coaching.

“The first several weeks of practice I do drills that allow all the girls to play all positions and practice all skills.  It’s a difficult adjustment for a player to play a different position, but if you have built a “team” environment, they are glad to help. At that point, you adjust your drills accordingly to the team needs and the players’ strengths. My coaching changes every year, depending on the girls I coach,” Barrett said.

The girls on the team also have to adapt to the differences that come with multiple players no longer on the court.

“We adjusted good and continued to work as a team even with people missing. The injured players continue to come to practice and games to cheer on and support the team, [but] with some players on the bench we’re losing motivation… because everyone is trying to adjust with new people out there, causing stress and a lack of communication on the court,” sophomore Kayleigh Doepker said.

Even as injuries were becoming a common occurrence, the emotions were there every time another person fell, for not only the girl hurt, but her teammates as well.

“We recently had a player injured during a tournament after she went up to block and came down on her ankle wrong. The rest of the team didn’t notice it at first, but the second she came down I knew something was wrong, and my heart immediately dropped. I froze in shock and couldn’t believe that we had another injury like this after having the same thing happen to one of our players less than 24 hours before. We continued to play after we subbed her out for our setter, having few options left, and as I played it didn’t feel real. I was still shaking in shock and all I could say was ‘oh my god, that did not just happen.’ However, while everyone was affected having to play different positions, we still worked together and won the tourney,” Maxon said.