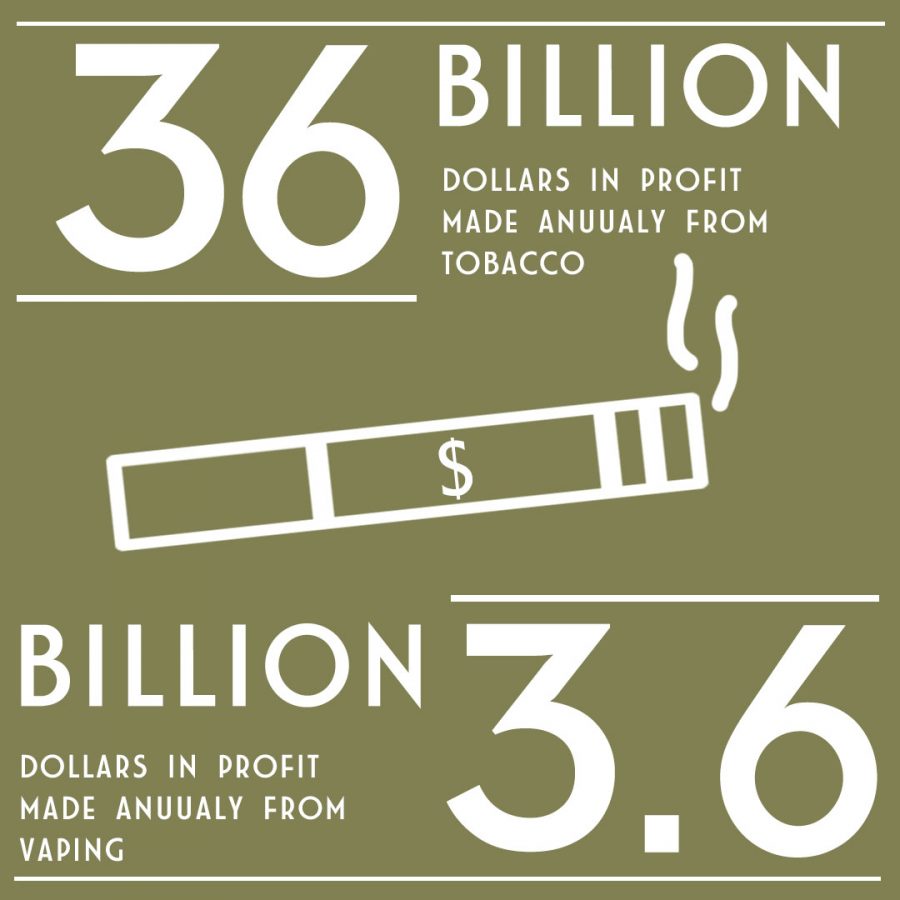 The topic of vaping has been debated time and time again, yet the severe lack of information about the devices has made the debate somewhat difficult. However, recently with 34 deaths being linked to vaping the blurred lines are becoming increasingly more clear. Due to this, it is widely speculated that the FDA will be making motions to ban the flavors of vape juice in an attempt to curb the mass usage of vape devices by teens. However, with all this talk of banning the flavors of vaping leaves one question in many people’s minds: why is so much action being taken against vaping but not regular cigarettes? Undoubtedly, cigarettes have so far had much more harmful effects with over 480,000 deaths a year linked to lung diseases caused by smoking according to Centers for Disease Control and Prevention. The answer is simple. Money. The tobacco industry profits an estimated $35 billion annually while the vaping industry only makes a mere $3.6 billion according to the Maurer Foundation. For these corporations cutting the head of the vaping industry while it is still young would cause far less damage than attempting to end the reign of tobacco. The tobacco makes far too much money for anyone to even begin to regulate it. It is highly likely that they have both the FDA and the federal government in their pockets so that they can continue to make the big bucks despite the human cost. Not only this but a large part of the vaping industry’s demographic is teens and young adults. Because of this, there is a large outcry from parents and those wanting to prevent nicotine addiction in young people is putting a lot of pressure on the FDA to make changes and making the movement against tobacco much less appealing. Most smokers are between the ages 45 and 64 according to CDC and therefore are considered old enough to be making their own decisions about nicotine addiction, unlike teenagers. After all, cotton candy flavored nicotine is considerably more enticing to children than tobacco. While this is an unfortunate circumstance and little can be done about the epidemic of smoking every day more and more is being done in research and prevention of vaping which can help contribute to less and less nicotine addiction.