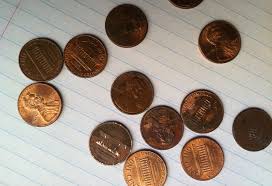 Pennies are the Worst

People have a misconception about pennies. They think that they don’t matter, that they are inconsequential to everything, that they can be annoying, and probably nothing else. Well, people are wrong; pennies are wrong and must be stopped. Of course, the actual piece of zinc that is known as a penny isn’t necessarily wrong, but the idea of it is.

The idea of participating in a useless act and paying more money to make something than it’s worth is – in my opinion- wrong.

Now, this notion only applies to certain things. A child, of course, costs more money than they’ll ever give back, but they’re probably worth it. We don’t hold the same attachment pennies as we do as babies, so the question still stands: why do we have them?

As of this year, a penny costs 1.5 cents to make and that amounts to a loss of almost $46 million on the production of more than nine billion pennies a year. Now some might argue that the abolishment of pennies would raise prices due to the whole 99 cent thing; this has been proven to be wrong.

Canada stopped production of their one-cent coin in 2012. It is estimated that this move saved taxpayers over $11 million dollars a year and that there was no significant rise in the cost of items.

They have also been proven to waste time. In a study done by Walgreens and the National Association of Convenience Stores, it was found that handling pennies added an average of two seconds to each transaction. This is not a lot of time, but this adds up to 48 million hours a year wasted on pennies. All the facts point to one solution: the end of the penny.