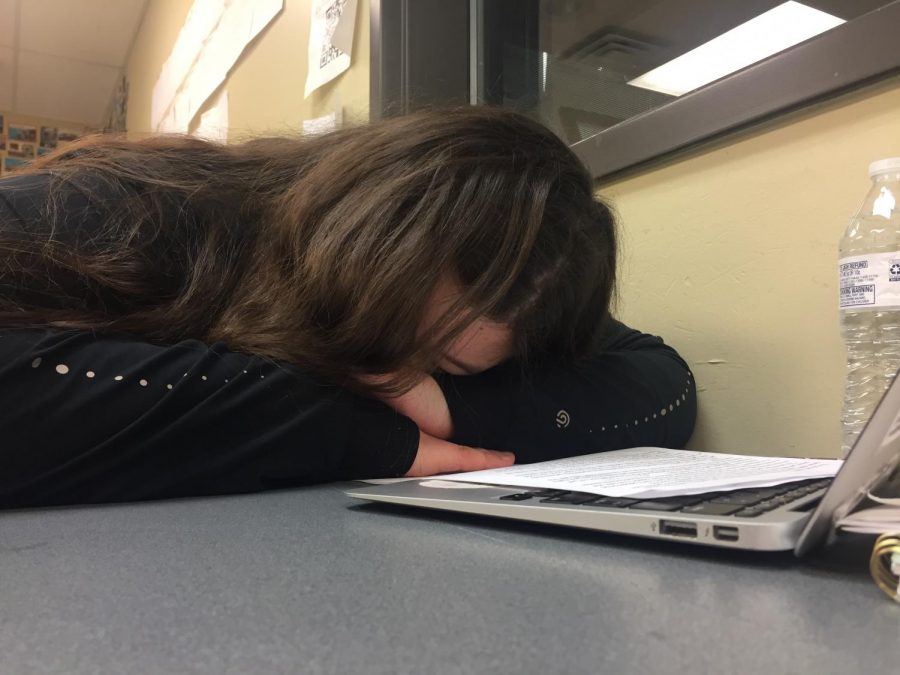 Quarantine has altered everyone’s daily lives greatly; whether it’s spending way more time with their family than they’re used to or having time to fill that’s never been available before. One of the biggest impacts of quarantine has been on our sleep. High school students are notorious for not getting enough sleep; staying up late on school nights and sleeping into the afternoon on weekends. But with virtual school not having a set schedule, how have the sleeping patterns of North students changed?

According to a study done by the National Sleep Foundation in 2015, while high school students require between 8-10 hours of sleep each night, most only get about 7. As a teenager myself, I can vouch for this idea of people my age not getting enough sleep. We have to wake up early enough to be ready for school, spend the whole day there, many of us have afterschool activities that can go as late as eight o’clock, and then we have homework to finish before we go to bed. Sometimes, it just felt like there wasn’t enough time in the day to sleep. But now that extracurriculars have been canceled for the remainder of the school year, and I don’t have to be up in time for school, I was drawn to the question of how my peers are sleeping now. How has quarantine impacted teenage sleep schedules?

Due to everyone being on their computers and bored all day, they have time to take surveys; a fact I happily exploited. We distributed a six question survey to every student in the school. Normally, we would be happy to get a ten percent response rate, about 200 students. I was delighted, however, to have received 367 responses instead. Armed with the data from a few hundred of my peers, I dove into the sleeping habits of the students of Liberty North.

The first thing I wanted to know was what time students are falling asleep. I know that personally, I don’t hit the hay until after 2 am, a feeling many of my peers apparently related to. 39.5% of respondents said they usually fall asleep after 2 am (24.8% falling asleep between 2 and 3 am, and 14.7% falling asleep after 4 am). 31.3% of respondents said they went to bed between 12 and 1 am. 27% reported that they were in bed between 10 and 11 pm, and unsurprisingly, only 2.2% (a measly 8 students) said they were asleep by 9 pm.

This information didn’t really come as a surprise to me: when students don’t have to be up in time to make it to school, there’s no reason to go to bed before midnight. But if they’re going to bed later, does that mean they’re waking up later?

Yes and no. Considering Liberty North starts at 8:10, I would consider “waking up later” on a school day as anything after 8. And boy did that fit most respondents. 33.8% of students who responded reported to wake up before 8 o’clock, with 7.9% waking up before 7, and 25.9% getting up between 7 and 8 am). But for the overwhelming majority, sunrise does not dictate when they rise. 39.5% of respondents reported not waking up until between 9 and 10 am, a camp I happily fall into, as did the largest portion of survey takers. 17.4% woke up between 11 am and noon, and a very drowsy 9.3% didn’t wake up until after 12 pm.

Our survey found that 48%, 176 respondents, were reportedly getting between seven and eight hours of sleep, with a further 23.4% reporting that they slept at least nine hours a night. 6.8% of students reported getting less than 4 hours of sleep a night, and 21.8% of respondents said they got between five and six hours of sleep each night.

So for the most part, students are either sleeping the same amount or more compared to when we still attended school in person. Yet, the lack of a good night’s sleep for many students (as well as them being at home and without anyone to tell them not to) made me wonder if students have been taking more naps during school hours during the quarantine.

To my surprise, they really aren’t. 279 respondents, 78.4% of those surveyed, reported only taking one to two naps during the school week. 18.8% said they took between three and six naps a week and  2% reported taking between seven and eight naps a week. What I was pleasantly surprised to find was that 0.8% of respondents, three people, said they took nine or more naps during the school week. I’m honestly impressed if that’s true.

Now, I will admit a fault in my survey: I failed to add an option for “zero naps”. But to be perfectly honest, I had just figured that every student would take at least one nap a week. But as it was pointed out by respondents in a later question, that is apparently not the case. Oh well, you live and you learn. So we know that students are staying up fairly late, which can lead them to them sleeping during the day, but what’s keeping them up so late?

From the responses, it seems the culprit is streaming and social media. I asked my survey takers to select all activities that distracted them from falling asleep, and 270 respondents reported streaming and 257 said social media. Staying up and talking to friends was also a common reason, with 217 votes; and gaming followed it with 132 votes. I was pleasantly surprised to see that reading was a common reason, with nearly 70 votes.

While I would normally say that students should try to put down the distractions and go to bed sooner, they’re getting enough sleep; and when they aren’t, they can take naps. While it’s not ideal, students are making the best out of the situation. And I’m sure we’re all enjoying the extra hours of free time and shut-eye.

The 367 wonderful participants in our survey!