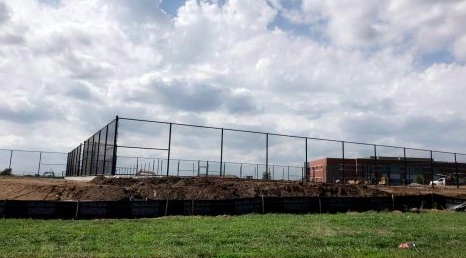 New wing, stadium, and now tennis courts that will be finished soon. Within the 2018-19 school year, the Liberty North tennis team was promised seven fresh courts on their own turf. Along with new courts the athletes were promised specified parking for them only. The gravel lot that has been displayed as complete by the first week of school has been pushed to November… The school can only imagine what other promises regarding these “great” renovations will be forgotten.

“We were given the date September 4th, but it’s probably going to be past that because of the recent rain,” tennis coach Doug Davis said.

The first home game of the Liberty North Girls Tennis team will be as soon as the courts are finished which we don’t know the for sure date because of all the rain we’ve had lately and if the rain continues the girls might not even get to use them very much. The girls can’t wait to be able to use the courts.

“It [the first game] was going to be September 4th, so now we’re hoping for September 5th and if that doesn’t happen then it’ll be the next week, but that’s what were hoping for,” Davis said.

The rain is pushing back the deadline for the tennis courts construction this season, but the original plan was to have the courts done prior to the beginning of the school year.

“They should have been done earlier. The district knew that we needed courts last June and it took them over a year to get started so, it should have already been done,” Davis said.