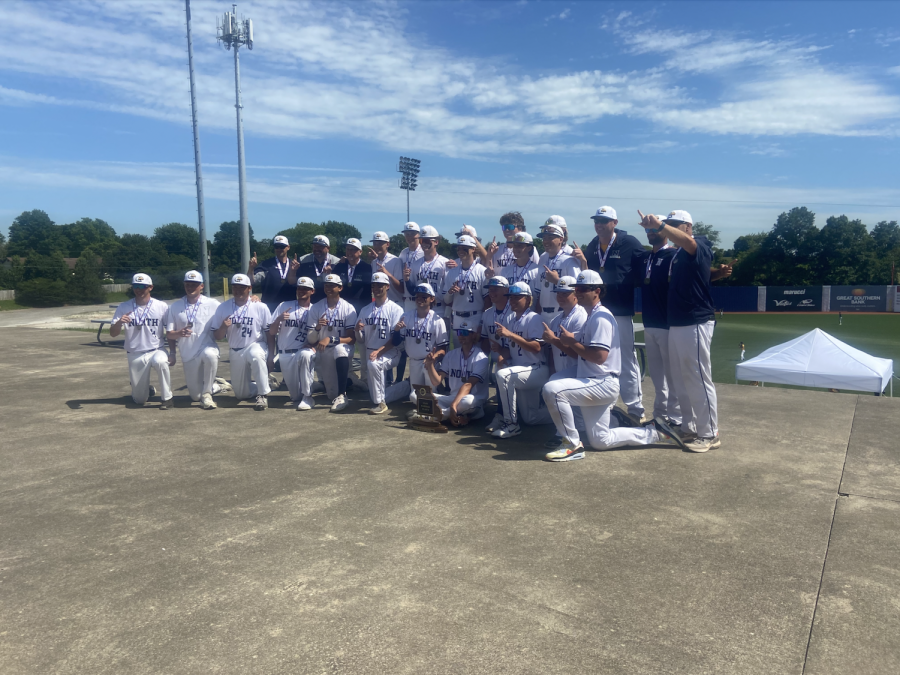 Season-long aspirations came true at the US Baseball Park in Ozark, MO last Saturday, where the Eagles beat Blue Springs South 11-2 for the Class 6 State title. After a 4-3, ten innings, semifinal win against Francis Howell, North was ready to confidently take the gold.

“Our team was in the right state of mind after a big win the day before. Our confidence was through the roof and we were ready to make LN history,” junior team member Jackson Downing said.

On top of the team’s semifinal win, the Eagles were no stranger to the Jaguars’ playing style.

“Knowing that we already played Blue Spring South and beat them both times really helped out our confidence going into that game,” sophomore Trey Snyder said.

Though the team’s first State appearance, the Eagles kept their strategy simple and straightforward.

“In all honesty, we approached this game the same way we did all of the others. We went in there, did our thing to get ready (hit, stretch, etc.), and then went out on the field to take care of business,” Downing said.

Not only did the team gain hardware, but lasting memories on and off the field as well. The season was dedicated to assistant coach Rob James, who inspired the team’s “#RFB” (Ready for Battle) branding, in solidarity with James’ fight against cancer. On the field, the team proved “ready for battle,” with post state celebrations that reflected the hashtag.

“Being able to spend this time and that dog pile at the end of the game with my new family (team) is a once in a lifetime experience,” Downing said.

The moment’s “once in a lifetime” reality was felt within the rest of the team too.

“It (winning) felt surreal, to be honest. It hasn’t set in fully, but the emotions were super high after the game and everyone was super excited… winning it all will definitely be a forever memory and I will always be smiling about it,” Snyder said.

For the Eagles, these memories are just the beginning. The returnees, including key playmakers Bo Jonas, Jack Lemasters, Jackson Downing, Tate McGuire, Trey Snyder, and Ty Wisdom, all hope to repeat the narrative next season.

“Trust me, we are already talking about doing it again next year!” Downing said.