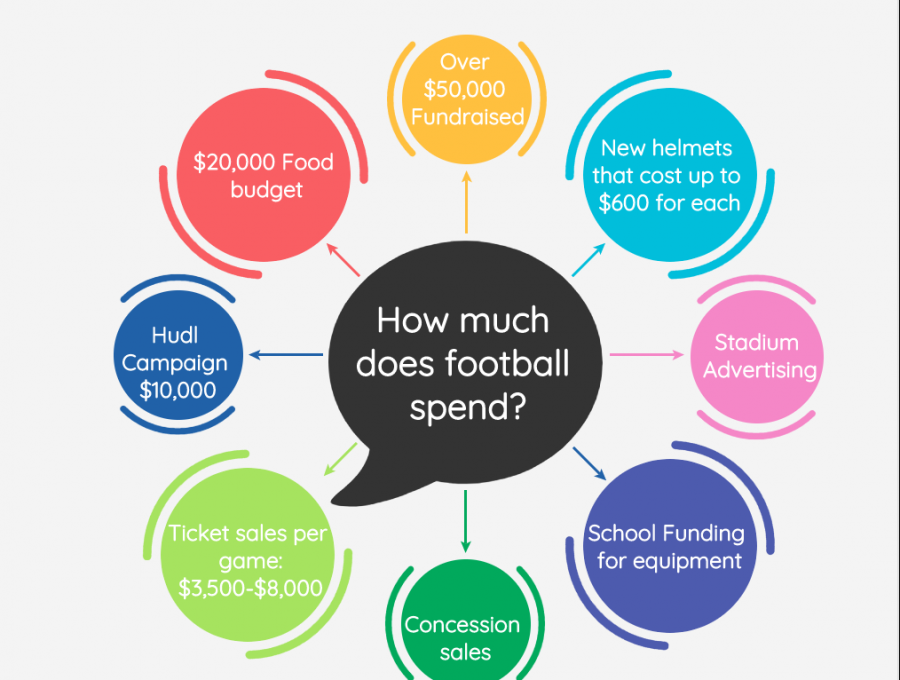 A typical family in the United States spends $4,000 to $9,000 on food during any given year(1). The Liberty North football team, a hundred players, a dozen coaches and a handful of managers spend $20,000 on food, if not more during the season.

There are around 180 players on the team with roughly a dozen coaches. With the typical ten games in a season, each player gets a ten-dollar meal before each game.

“We get pre-game meals and we also get Gatorade in the morning before school starts. A lot of teams don’t get that or as much as we get. They might just get sandwiches but we get a whole meal,” Senior Running Back Ke’shawn Turner said.

The football team fundraisers by doing card sales throughout the summer. They sold over 2,000 cards through their efforts. At $20 a card, that is a significant amount of money fundraised for the team. That does not include the Hudl campaign that they do in order to receive donations.

“The team did a lot of fundraising. I don’t know how much money exactly but I know it was enough for us to be set for the rest of the year,” Turner said.

With the fundraising, the football team also receives a portion of money from the general athletics fund that they used solely for equipment.

“Our budget that the school has is pretty much used for equipment and equipment only,” Jones said.

Even with the money from the school, the fundraising still covers a portion of the needs of the team.

“[The team fundraises] as much as they need to cover their ‘wants’ list, the school provides for the ‘needs’ list. It varies year to year. They spend a lot of money on meals by the sheer number of players that the lion’s share of funds pays for each season,” the Athletic Director Bob Kernell said.

The money given from the school to the teams all comes from a budget that does not include the building. The district oversees this account.

“The district gives athletics (and Fine Arts, transportation, maintenance, etc.) a budget separate from the building budget.  This is zero-based budgeting, which means you prove a need for every dollar every year. Each coach controls a certain part of their budget for items of needs for their program, for example, basketballs for women’s basketball or shot put for track. All money needs to be spent in a fiscal year or it will be sent back to the district to be used in the general budget,” Kernell said.

Ticket sales do not typically go in the regular budget that is dispersed. The money is used to pay officials and all of the workers in the process of the games.

“Football tickets sales range from $3,500 to $8,000, NOT counting student passes, conference passes, senior citizens, etc. We get no money from ticket sales directly to any of our sports or activities. The revenue for any and all regular-season game ticket sales goes into a district fund for disbursement as needed throughout the district for anything. Tournament games or theatre production ticket money stays in the building to pay expenses such as officials, costumes, props, gate workers, etc.” Kernell said.

All the money from the ticket sales does not go directly to the team but eventually, the team gets a portion of the revenue.