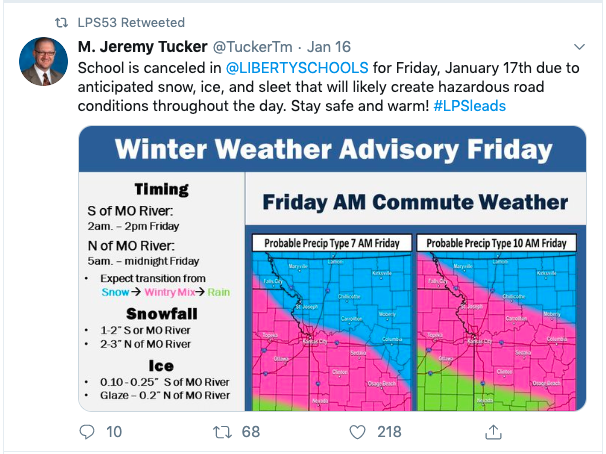 The season of snow and ice is fast approaching which means the chance of many snow days. The many students at Liberty North could be hoping for a snow day for any reason. Some might think the decision making for a snow day might be easy, but in reality, much goes into the final decision. The Superintendent works with the Chief Operations Officer and the Transportation Director to get a good idea of if school should be canceled or not.

“A snow day is an interesting process. The thing we always say is it’s one of those decisions that whenever it’s made we know that not everyone is going to be happy on one side or the other. Our Superintendent is involved, he’s ultimately responsible for deciding although he will get a lot of input from both our Chief Operations Officer and our Transportation Director,” Director of Communications Dallas Ackerman said.

Another key piece is keeping in communications with the many other districts around this one. If another district might be considering a snow day it could increase the likely-hood of the decision here to be made.

“Another pretty big piece to it all is staying in contact with our neighboring districts. North Kansas City and Park Hill would probably be the two biggest districts that we keep in contact with along with Kearney, Platte City, and Smithville,” Ackerman said.

“The idea of virtual snow days– I like it because we don’t get out at a later date but there can be so many issues like people not doing the work or just technology issues especially with people that don’t have wifi at home,” sophomore Selene Paredez-Nuñez said.

The decisions for late starts and early releases will be more in place, but a bigger change is when the days will be made up. Schools will now be using some of the holidays that would normally be days off to make up snow days.

“This district’s calendar looks a little different in the fact we make up the first day in February the Monday of Presidents day, then the second day on the Friday before Easter. The third and fourth, if we have those, would be made upon the Thursday and Friday for Memorial day. Days after that we will implement a flexible learning or virtual snow day model our academic services team has been working on,” Ackerman said.