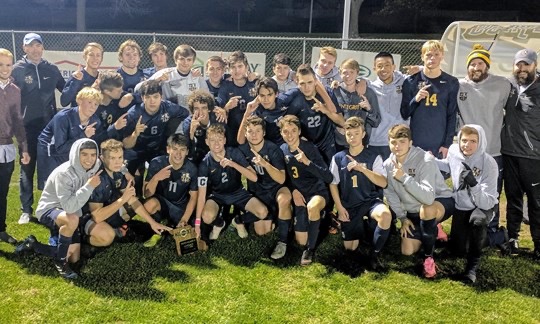 In Liberty Missouri, the best rivalry is the Liberty Blue Jays versus Liberty North Eagles football game. The game that goes under the radar is the soccer game. The rivalry started ten years ago when Liberty Public Schools added the Liberty North High School Eagles to the list of schools in their district.

“It’s a big game because it’s our rivals. The Liberty vs. Liberty North game has been the biggest game since I’ve been in high school,” Senior Captain Cristian Parada said. “When the schools split we kinda started the rivalry and it’s usually a pretty fun game.”

Even for the freshman on the team, the game is exciting.

“I’ve only heard about the hype. I’ve never played in the game but I’m excited.” Freshman Carson Schmidt said.

Once the rivalry started, the scores have gotten tighter with both teams winning roughly fifty percent of the games.

“The teams have just been rivals since the school split. There’s really nothing else to say. They don’t like us and we don’t like them.” Senior Ashtyn Page said.

Liberty North soccer has had a week off of playing and planning on coming to the game confident about the way they will play.

“We’ve had a lot of trouble possessing the ball and working through the whole game but we think we fixed it. It’s been hard but we are coming ready to play some soccer.” Page said.

As little kids, the players learned to dislike the opponent.

“I think they’ve just always been that way. I’ve never liked Liberty growing up so I guess it’s the same for the rivalry.” Schmidt said.